Our work combines elements of durational and time-based art, minimalist movement, and electroacoustic music and sound. Materially, this work has been presented in numerous forms, including sound installation, photographic series, durational installation and performance, video, and sound and extraterrestrial radio installation. All main projects are listed chronologically below.

Harvest is a score-based work for four performers, outdoors. The sound of ringing bells from four different locations are simultaneously recorded, when they begin to ring at 6pm. These recordings are then re-played in a loop by the performers. They then start to walk towards each other, through the streets of the city. As they converge, the sounds of the four recordings combine, creating an ephemeral acoustic gathering. Once the performers meet, the loops are ended, and the work is complete.

The audience of the work are at the performers’ meeting-point. At the beginning, they can hear the original four bells ringing in the distance. Over the course of the work, as the performers walk, the… | Full details »

Other Trains is a currently-ongoing research process, derived from the overlap of two areas of technology — machine learning, and railways. The research is being undertaken with the intention to present the outcome as a video installation in the coming year.

In this research work, we have been using machine-learning-based audio synthesis to generate audio of trains which have never existed, but are generated in software — computationally-dreamt imaginings of non-existent trains. In parallel with this, we are also retracing, on foot, the routes of a series of abandoned, disused, or disappeared railway lines in Berlin and Brandenburg, documenting these walks on video. Our… | Full details »

Alluvium is a sound installation which is based around sound emerging from underground, outdoors, in a countryside garden. The work combines two sources of sound — the first is derived from amplifying sounds that are happening underground, within the soil itself. The second source is an accompanying series of overlapping vocal loops. These two aspects are then generatively combined, so that they never repeat in exactly the same way.

The word ‘alluvium’ is a geographical term describing the process of water acting on soil — eroding it and transforming it. The work takes this word as a poetic prompt of sorts — the sound integrates recordings from the soil, and the speakers themselves, in turn, cause the earth to resonate… | Full details »

Carried Bells is a process-based work, in which sounds and images of a series of twenty ringing bells are recorded in an urban environment. These recordings are then carried on foot, in a repeating daily task, to a central installation, which adds one recording each day over the course of the presentation of the work.

Carried Bells harvests traces from the city — exploring acoustic phenomena, social history, and the potential of public space. The incrementally-accumulating installation that emerges allows these individual recordings of particular bells to accrete and combine in unpredictable ways. The work aims to bring the bells of the city out of the backgrounds of… | Full details » 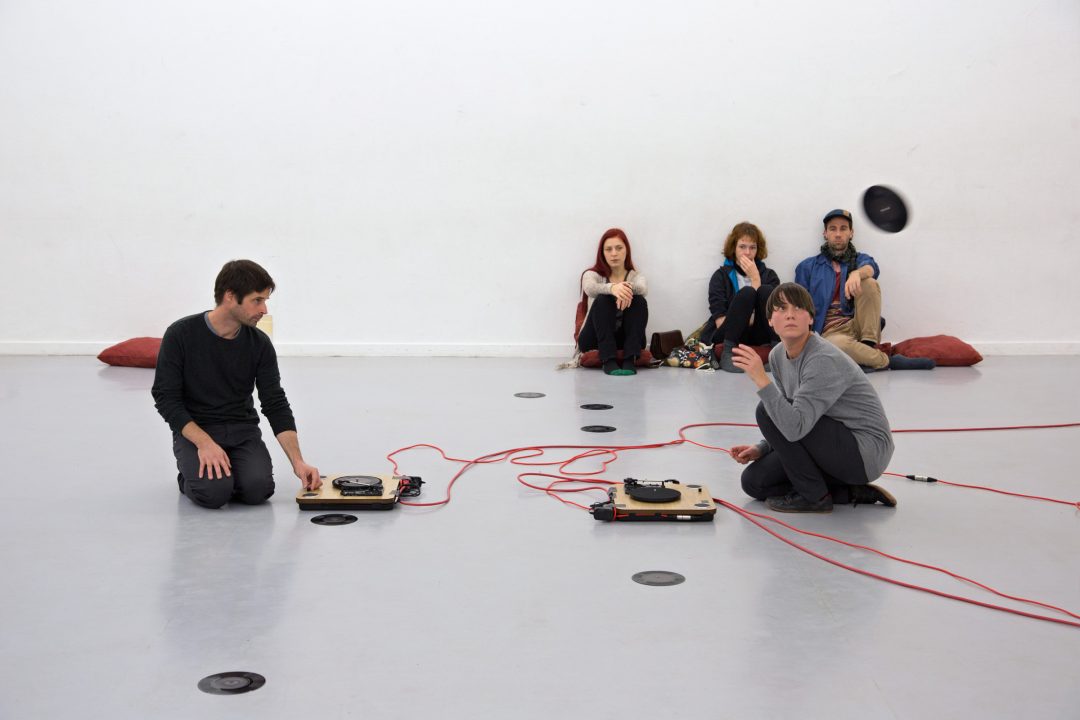 1–100 is a performance-based work in which a hundred copies of the same record are played, one after another, and the resulting sound is looped and layered, by two performers, as they move around in a single space. The actions undertaken iterate a repeating task. Each record is played, recorded, and looped in a precise score, integrating record, player, and speaker—object, movement, and sound. However, the specifics are decided in the moment, creating an aleatoric composition of fragments of recurring sound. Images repeat as deliberate movements rearrange the space. 1–100 was initially presented as part of impro.per.arts’ 60_minutes series at Kunstquartier Bethanien in October 2017. | Full details »

Signal Tide is a sound and extraterrestrial radio installation. It combines real-time signals from an abandoned satellite currently orbiting the earth (the LES-1, launched in 1965) with specially-commissioned music and sound, created in collaboration with David Bryant (Godspeed You! Black Emperor), Drew Barnet, and James Hamilton.

Signal Tide was initially presented at Los Angeles County Museum of Art, from September 21.–24., 2017. Research and development of the work was supported by the Art + Technology Lab at LACMA, as one of the recipient projects of the Art + Technology Awards 2016. | Full details »

Afterglow was a sound installation, which was presented on Saturday, October 8., and Sunday, October 9., 2016. The piece was presented in a large resonant basement space of the Musikbrauerei building in Prenzlauer Berg, Berlin, as part of the closing event of Digital in Berlin’s Kiezsalon 2016 concert series.

In Afterglow, the entire run of Berlin concerts in the Kiezsalon series were combined to create a single, ephemeral, site-specific, eleven-channel work. To do this, all concerts in the series throughout 2016 were recorded, and this audio was then used as source material for the installation. In the installation, excerpts from these concert sets were played… | Full details » 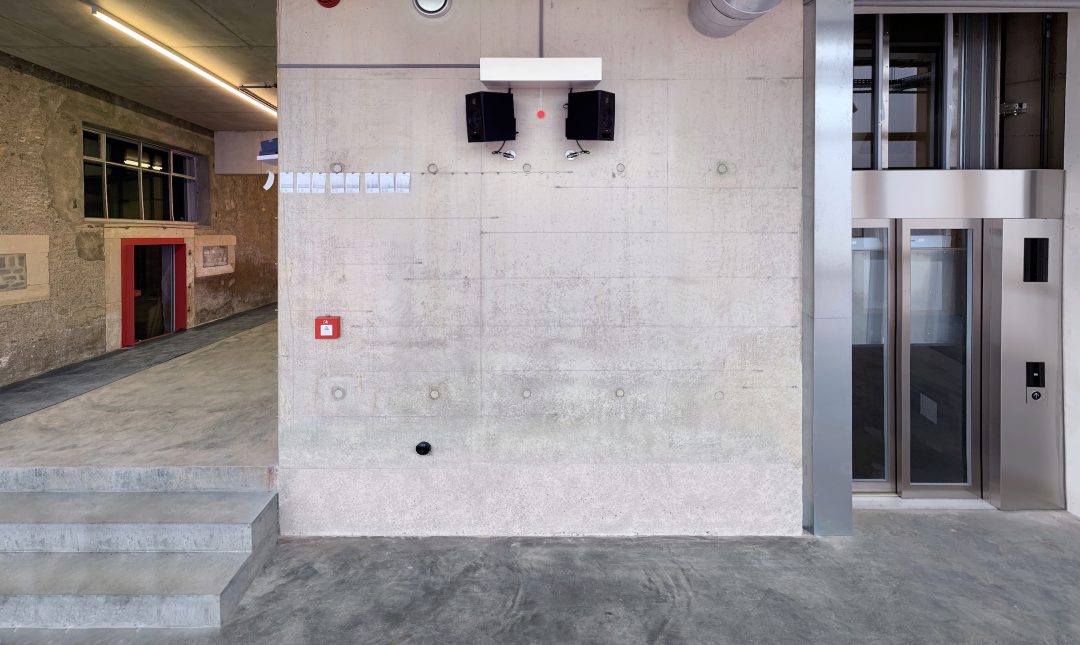 Minute/Year is an automated, process-based, durational work, in which sound is played, recorded, and layered, in a resonant space, for one minute each day. The result that is created each day is then automatically published online. This process occurs daily, but the location of the space in which it occurs alters annually. Over time, this has meant that the work has existed in a variety of public, private, and semi-public spaces, outlined below. It is currently situated in Lely, an artist studio and living space in Amsterdam, Netherlands, for the whole of 2022.

Each day’s one-minute-long recording is archived as audio, with an accompanying spectrogram image and video. This… | Full details »

XB Trio is a short, three-part audio and movement piece. The work combines layered live vocal and percussion with spatialised sound, through the use of small, battery-powered speakers. These are moved in a series of slow circles, adding layers of looped audio as they go, overlapping and recombining in unpredictable ways.

The work was first presented, as part of the XB Sunday Matinee series, at XB-Liebig in Berlin in December 2015. | Full details »

Increments is a durational installation. Over the course of several hours, in a series of repeating actions, two performers record and play back sound on two drums. The performers switch between adding sound and listening, alternately active and contemplative. Over time, layered recordings are formed of both the drums and their acoustic reflections in the room.

The actions taken remain minimal and deliberate, the space carefully arranged. But the sounds slowly increase in volume and intensity, accreting gradually over hours into rhythmic fragments, architectural acoustic traces, and feedback tones. The piece invites viewers and listeners to experience this transition, and to immerse themselves in… | Full details »

Echoes is an installation-performance of five moving participants and one guide, presented inside a courtyard or large enclosed space. The piece takes audio reflection and the spatialisation of sound as its starting point. Over the course of approximately thirty minutes the six participants present a series of interactions of movement, sound and audio reflection—specifically through cycling, singing, and echoing. 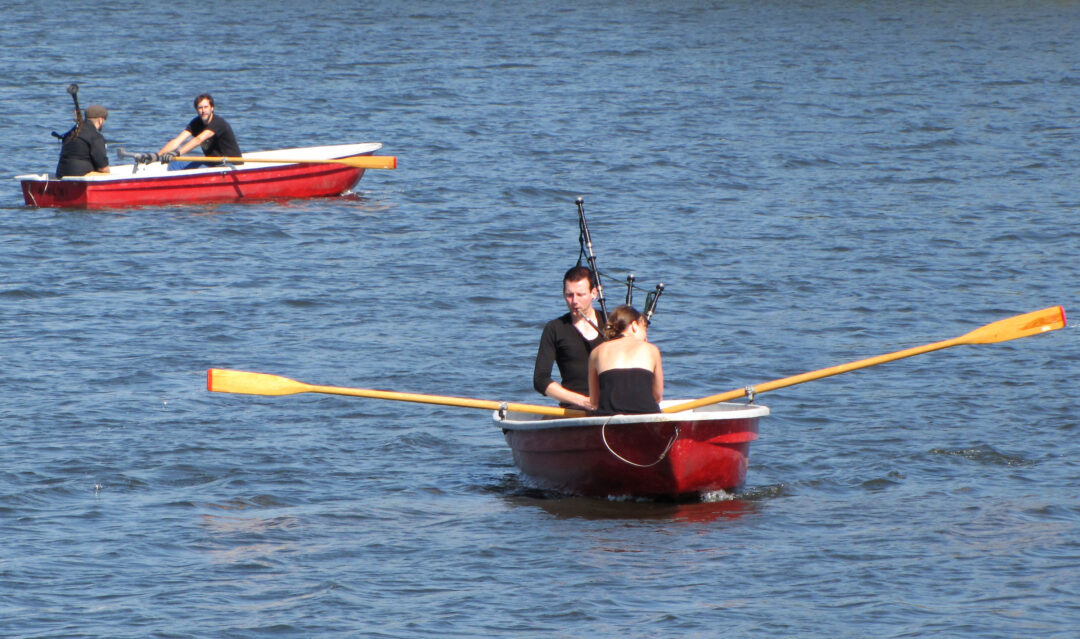 Drone Pattern is a work that presents two rowboats, with a rower and a piper in each boat. The work is based around a score of interlocking boat movements and pipe sounds. The two pipers play alternating sections of drone, melody, and silence, as the two rowers move the boats across the surface of a body of water. From the perspective of viewers and listeners on the land, the sound is altered not just by the iterations of the pipers playing, but also rises and falls due to the physical distance to each sound source, due to their movements across the surface of the water.

The work was initially presented on the river Spree in Berlin, in September 2013, as a one-off installation supported… | Full details »

Accompanied Walk is a performative installation of two walkers and two drummers. In the piece, two walkers move towards and past each other, as slowly as possible. This action is accompanied by a continual snare roll, shared between two drummers.

This piece juxtaposes meticulously slow action with tense and concentrated sound, and (in a similar way to related works such as Minute/Year and Increments) it also emphasises the differences that can occur when specific scores and actions are repeated in architecturally-varied environments. As such, it has been presented in numerous locations and with differing participants. | Full details »

Ice is a series of videos, and a work-in-progress. This work is researched further every winter — a process which has been ongoing since 2011.

The work is a series of one-hour-long, two-channel video installations. These two matching videos are shot in two parallel single simultaneous live takes, recording a winter sunset from opposite sides of the same river.

In these videos, the sound of ice moving on the surface of the river is audible, as the image itself fades from day to night over the course of the hour. Two figures are visible on screen, witnessing the process unfold. | Full details » 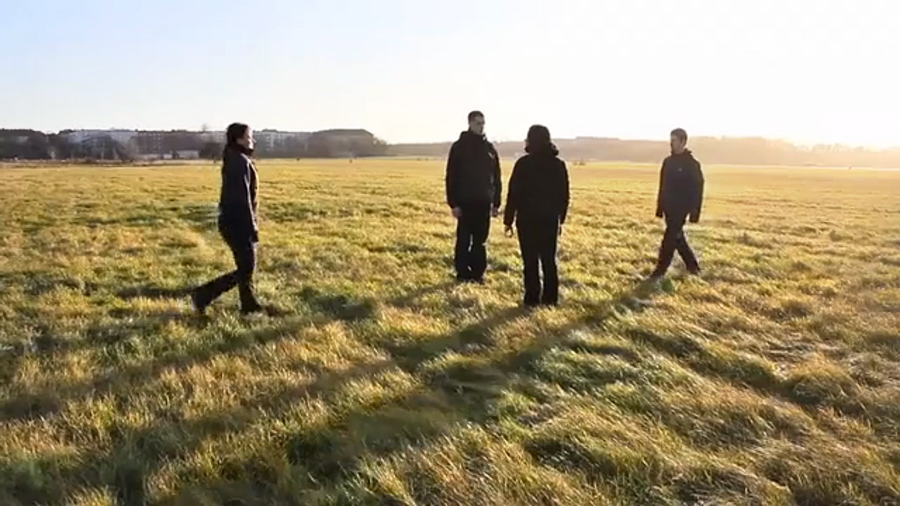 Retreating Sounds is a movement and sound performance for four participants, presented outdoors.

The performers present a score in which they exchange matched hand-claps and matched movements, as they retreat away — both from each other, and from the audience of the work. This process continues until they become inaudible. The focus of the work thus alters over the course of the piece from performers to environment. The length of the piece differs depending on the surrounding acoustics and topography of the environment where the work is presented. | More »